I’ve not had much success making fudge recently. The vanilla fudge was a sticky mess and I’m pretty sure that’s because I didn’t beat enough on cooling. Then I made the orange fudge and it was more like tablet!! I’m not sure if I maybe over boiled or beat it too much! So was hoping this would turn out better… 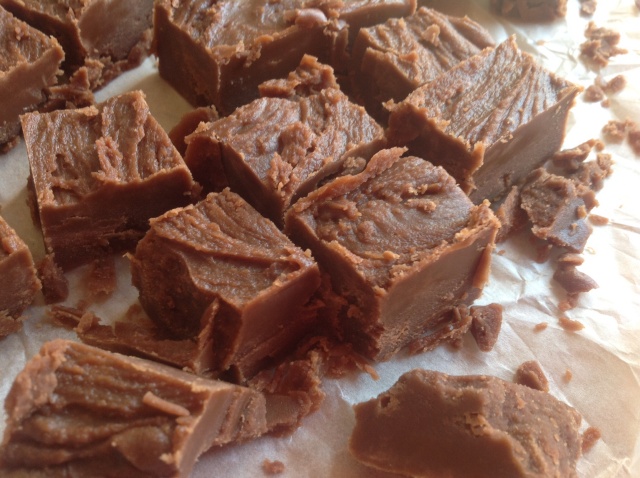 I liked the sound of the suggested additions but considering I’ve not had much fudge success I decided to keep it simple. I didn’t have granulated so just used caster sugar, it does say earlier in the chapter that you can use either.

I have a very handy sugar thermometer so know when it’s at the right temperature, but you can use the test of dropping a small amount in cold water and it should form a soft ball that flattens when you press it.

Then I started the beating stage. The consistency does change quickly and becomes really thick and creamy looking, and I was tempted to stop now but I couldn’t feel any grains..

Then it does start to change again and can feel the grains so I transferred into my tin. The minute it hit the tin it was becoming quite solid so was now worried I had beat it too much again and was going to heading towards tablet again!

I left it for a while then cut into cubes, well I tried to cut into cubes. It was a bit crumbly in places so didn’t get nice clean cubes like I imagine you should with fudge!

Well it tastes great!! It’s a lovely chocolate fudge/tablet! It’s a bit hard to call a fudge but not quite hard enough to be tablet! So next time I think I will stop beating a bit earlier. I made this for my gran and we all had a taste and was liked by everyone, it’s just not the right consistency.

Would I make this again? Yes, it’s good and a nice idea to give as a gift