This recipe apparently comes from America, but is Eros not the Greek god of love?? Not too sure how that relates to this recipe, but I thought it sounded good.. 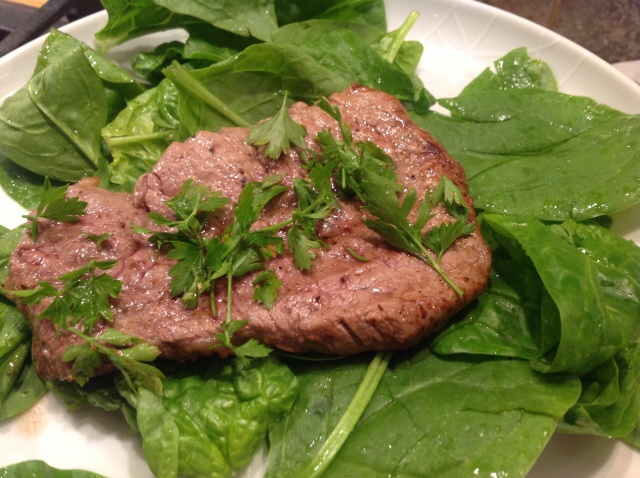 I couldn’t decide if the fillet steak should be cut into portions or kept as one bit. I was only getting enough for the two of us so I just asked the butcher to cut up for me and hoped that would be ok! 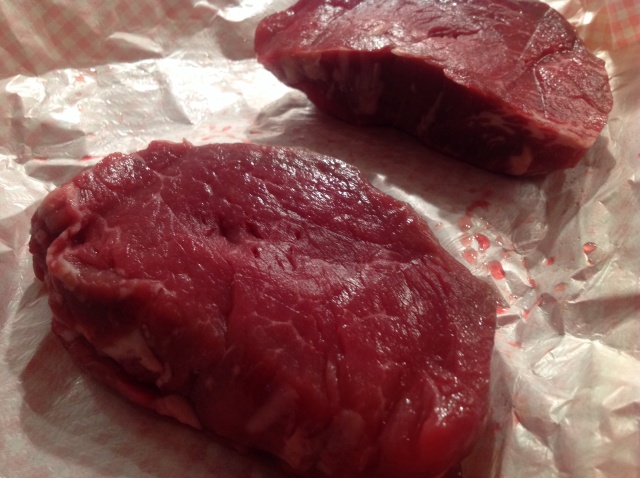 It did feel a bit wrong to beat this lovely fillet steak until it was thin! I certainly didn’t beat until it was very thin as that just felt wrong!

Then 1/4 pound of butter sounds obscene! I know I am halving it but when you start to talk about butter in pound quantities it just gets a bit disgusting!!

I couldn’t decide if the recipe meant to make the sauce in the grill pan but actually cook the meat under the grill, or if I was meant to put the meat into the grill pan with the sauce. I opted for the latter, it’s not that often I have things fried in butter and it is a special occasion!!

I could almost feel my cholesterol level rising as this was cooking..

Due to the sheer calorific value from the butter I opted to serve simply with fresh spinach leaves. There was a lot of buttery juices left in the pan after I removed the steak and I was tempted to pour over but that felt like something Homer Simpson would do!!

So steak on spinach it was..

I think I can easily say this is the best bit of steak I have ever cooked! It’s delicious! The steak is perfectly cooked, just the right amount of pinkness. You can really taste the richness from the butter and Wocestershire sauce but in a fantastically good way! We both really loved this and am glad we had just with spinach, really is a fab recipe and it’s a shame my dodgy photos do not do this justice!

Would I make this again? Absolutely!! I now know why it’s called steak Eros!

One thought on “Steak Eros”