I imagine this to be a really light sponge cake, I tried to search for other recipes but just kept finding recipes for chantilly cream sponges! The name conjours up a light fluffy delicate cake, but after reading the ingredients and seeing the flour to butter and sugar ratio I’m not so sure it will be that light…

First off I creamed the butter and sugar..

Then added the eggs and flour. It’s hard to say if it’s too dry at this stage, I thought it seemed ok so didn’t add any milk..

Then I added the almonds and walnuts..

I opted to use my multicoloured cherries, and 1 oz of Angelica actually works out as quite a lot! Think it’s going to be a colourful cake!

The cherries and Angelica are all added, and usually when making a cake with cherries I coat them in flour before gently stirring in to avoid sinkage. For this I just added them as they are, the cake mix feels quite thick so hoping they will stay mixed through ok and not all sink to the bottom..

After an hour and 15 minutes is a nice dark golden colour and fairly well risen..

I left it to cool slightly before trying. It’s certainly got quite a bit of a crust! Then inside it is a bit crumbly, I maybe should’ve added some milk!

Well I love the crust and all the walnuts and fruit have stayed well distributed which is good! Yes it’s not the light airy sponge I had imagined but it’s still really good and brilliant with a cup of tea! I love the cherries and Angelica through it and the walnuts add a nice crunch.

Would I make this again? Yes!

This recipe comes from the recipes around the world chapter and is apparently from Belgium..

I made this yesterday and didn’t start until the evening, it does take a bit of time so was quite late by the time it was ready!! Seems like quite an unusal recipe. First I mixed the yeast, flour and milk. I didn’t have fresh yeast but I used a yeast conversion calculator to work out I need half a teaspoon of dried yeast!!

I left it to rise for 45 minutes but didn’t look like too much had happened! I gave it a bit longer and still hadn’t risen much..

I added the rest of the milk, flour and eggs and attempted to beat, but it’s really thick and sticky so not very easy!

So the recipe says to roll it out onto a board, but there was no way I was going to be able to do that with this, it’s far too sticky. So I just poured it into the tin..

While that was left to rise I stated with the topping..

The dough did rise significantly at this stage, so I sprinkled over the topping and then into the oven..

After the full cooking time it was looking good, nicely golden and crunchy on top and had risen well..

Last night we had to try a slice warm from the oven with butter..

It is really soft inside although perhaps a touch doughy so maybe could’ve done with a bit longer in the oven, but despite that it’s really good! It’s like a sweet bread and the topping is brilliant!!

This morning once it had fully cooled I had a couple of slices with jam..

It still tastes really good, I did give it a few seconds in the toaster as it’s still a bit doughy. Overall though it’s a lovely tea bread, especially the topping!!

I think this is a very classic recipe and I vaguely remember my mum making something similar but with chicken! I was actually making this with plaice, I’d bought two whole plaice and decided I would fillet them myself, what a mistake! 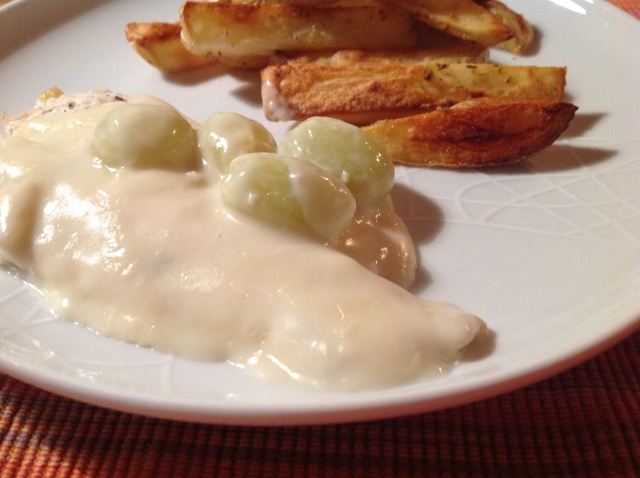 I do not know why I thought it would be a good idea to fillet the fish myself, I really should’ve asked the fishmonger to do it for me..

So after 3 knives, one pair of scissors and about half an hour I had a really sorry looking set of fillets. I had two fish and according to the website I was using for filleting advice I should’ve ended up with 8 fillets. I ended up with 7 awful looking examples of fillets.. 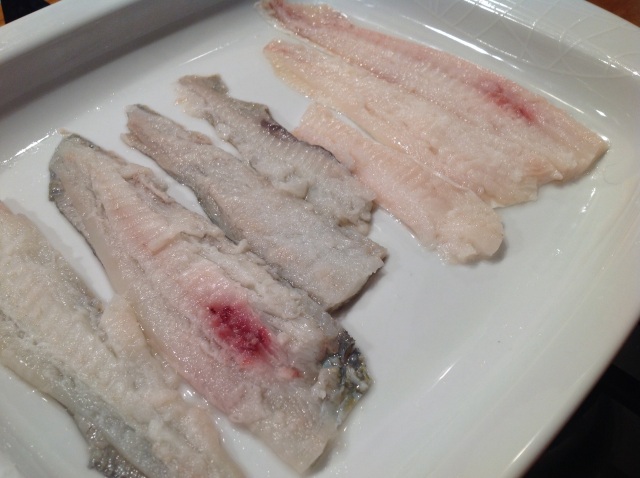 My next issue was that I forgot to get mushrooms! Had to just carry on without and covered the fish with all the other ingredients.. 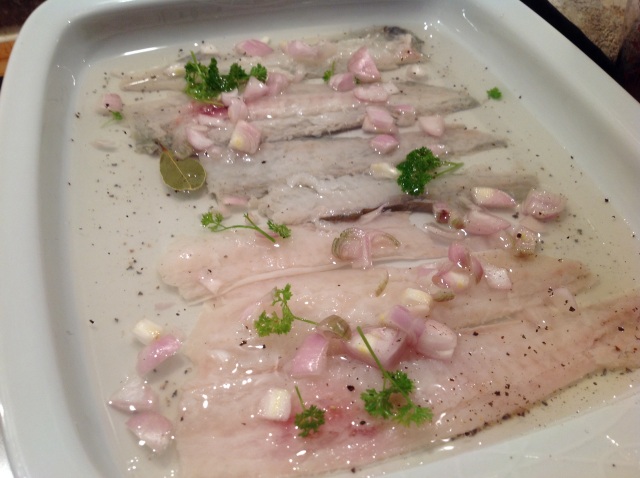 While this was in the oven I started simmering the grapes, and then I did peel them! What a completely tedious thing to do! I did start to think it was a bit unnecessary and what differnce does it really make so I only ended up peeling half of them… 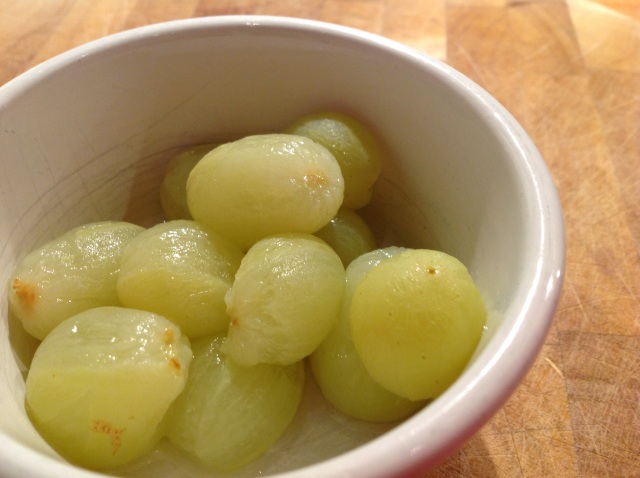 I took the fish out the oven after only about 12 minutes and was well cooked and even more pathetic looking!

Then I made the sauce and poured over the fish..

We were having this with some homemade oven chips, kind of a posh fish and chips! I don’t think my husband and daughter were very impressed when they saw the grapes in the sauce! 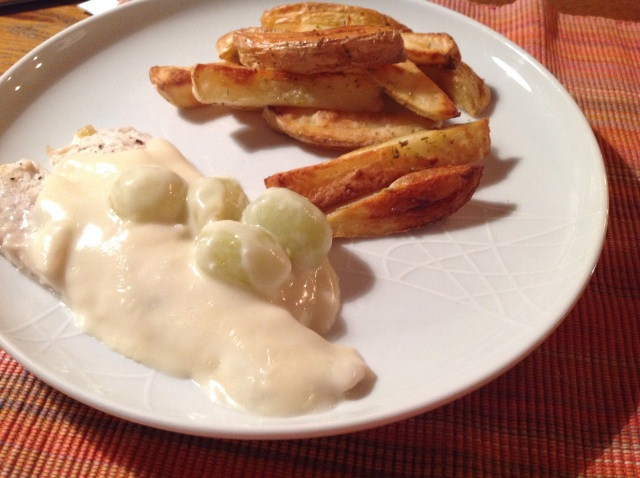 There really isn’t much eating in this dish, which is such a shame as the fish is really nice. It’s very soft and I did actually quite like the sauce and grapes with it, can’t say the same for the other two sharing this with me!

Would I make this again? Maybe…