We were having pork tenderloin for dinner tonight and I fancied jazzing it up a bit so decided to make this to stuff it with..

I had half a cooking apple to use up which worked out as just over 4oz so I reduced the rest of the ingredients, and mixed them all together..

I bashed out the pork as thinly as I could and then spread the stuffing over that..

I rolled up the pork as tightly as I could and then put in baking tray in the oven for about 40 mins. It did actually keep its shaped quite nicely!

I sliced up and served with some hasselback potatoes and sweetcorn.. 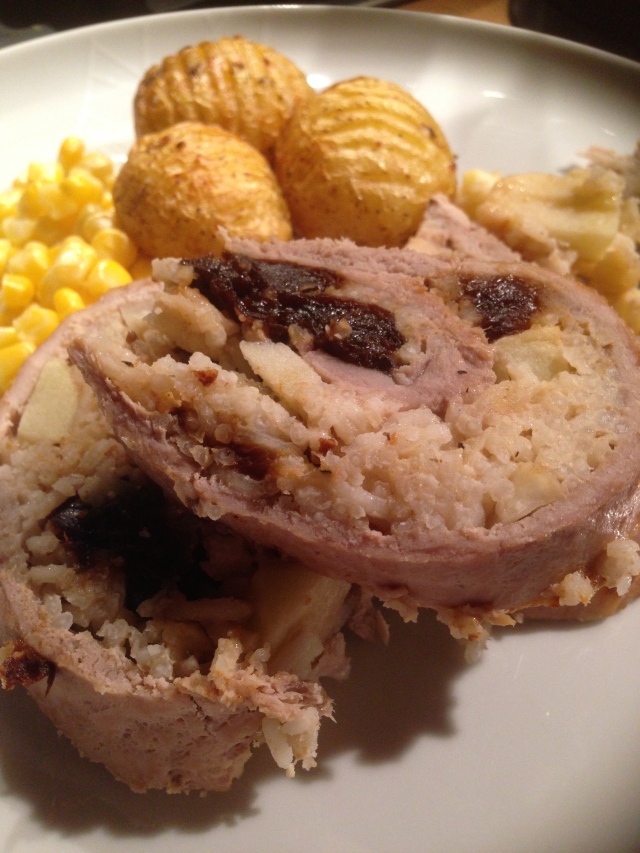 This stuffing does go nicely with the pork, and the sharpness from the apples and sweet prunes all blend together well. I did feel it was lacking something! I’m not sure what, maybe I just simply under seasoned it!

Overall though it was nice stuffing and a great dinner!

I had a cooking apple in the fridge and we were having pork for tea so I decided to have a go at this and attempt to stuff the joint of pork..

The recipe says to use four medium cooking apples but I had one large one, so I sort of reduced the rest of the ingredients accordingly! The bacon, onion, celery and apple are fried until soft..

Then I added the breadcrumbs, parsley, seasoning and about a teaspoon of sugar..

Then it’s all mixed together..

I don’t think the joint of pork I had was really big enough for stuffing, but after some slicing and bashing I had managed to get all the stuffing inside! I had kept the butcher tie things to use to hold it all together.. 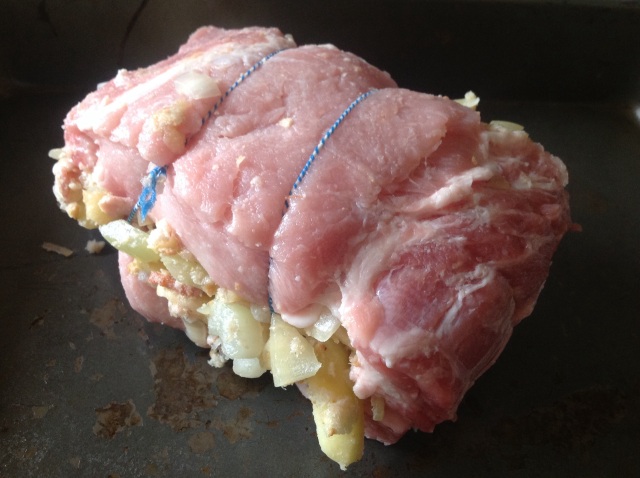 After about and hour and 15 minutes it was cooked..

So the stuffing stayed in the joint during cooking but it didn’t exactly slice up very well!! 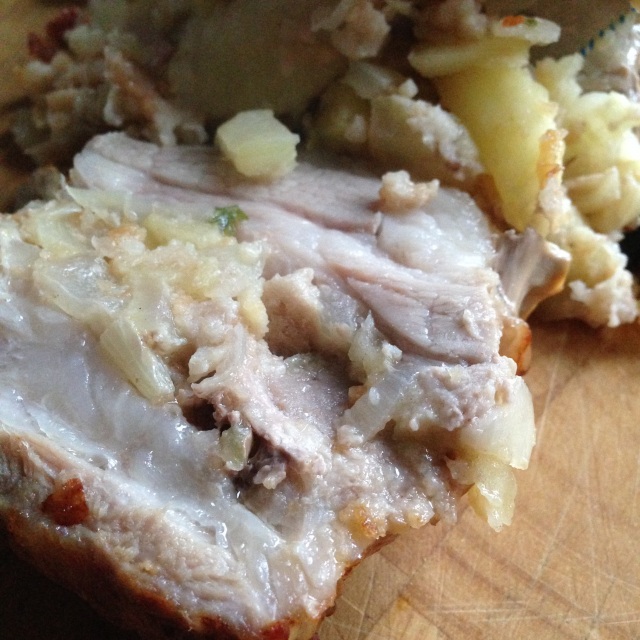 In fact it was a complete mess!! All the stuffing fell out as we attempted to slice it, which I am blaming on my rubbish knives! Anyway it’s more important what it tastes like and it’s tastes good! The stuffing is really nice and all goes well with the pork.

Would I make this again? Yes

I fancied stuffing some chicken thighs tonight and decided to use this one. It does say it should be used as a stuffing with vegetables but I decided it would go nicely with the chicken..

I was opting to use bacon for this and it doesn’t really require much cooking! 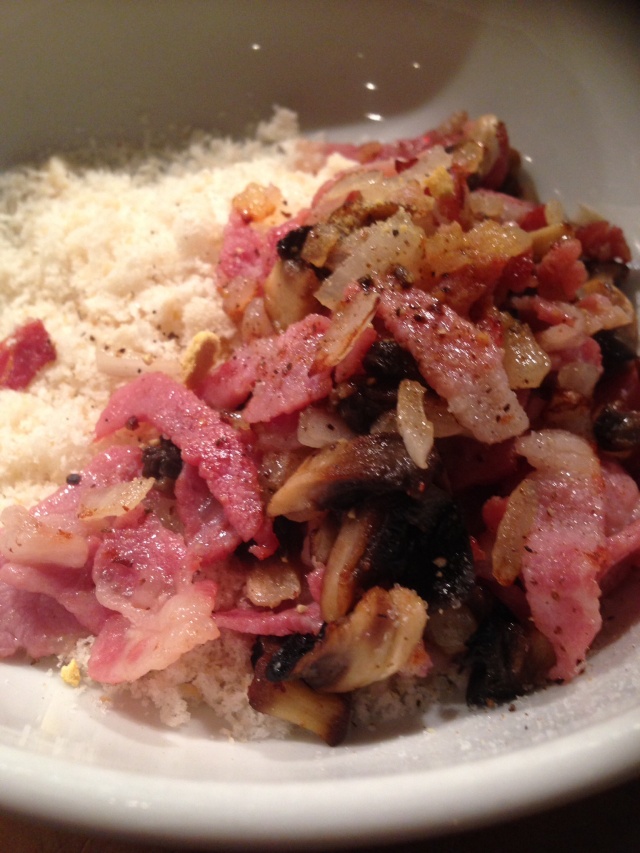 Once all mixed up it doesn’t look very interesting!

So then I skinned and boned some chicken thighs and attempted to stuff them! I kind of spread the stuffing over the thighs and then rolled up. I had to use toothpicks to hold them together. Then I browned in a frying pan then finished off in the oven for about 20 minutes..

We had this with some mashed potato and mushroom sauce..

Well for a stuffing this is nice enough! I think it went rather well with the chicken. It’s not the most exciting recipe but I think a good sign was the plates scraped clean but all three of us!

Would I make this again? Possibly

I had some giant mushrooms to use and fancied stuffing them with something! I know this recipe says to serve this with pork but I decided it would be good with the mushrooms..

I have to say the smell of an onion boiling is not particularly pleasant! It was starting to put me off until I opened the sage and that nice smell took over! I was halving this to stuff two giant mushrooms and I didn’t think it was going to be much but by the time it’s all mixed together it looks like loads!

I was worried that it was going to be really dry as it didn’t seem like much butter and the other ingredients are all dry. I was thinking that maybe that’s the point of serving with meat so that the juices from the meat soak into the stuffing? Am hoping the mushrooms have the same effect!

There’s not really much to say about making this, is super easy and pretty quick. I guess the idea is to stuff a joint of pork so you would maybe need more depending on the size of the joint. I didn’t use all of this between the two mushrooms.

I then decided this needed cheese on top! 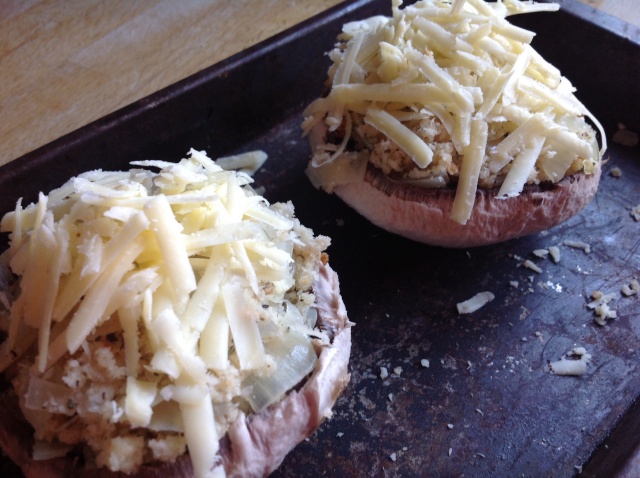 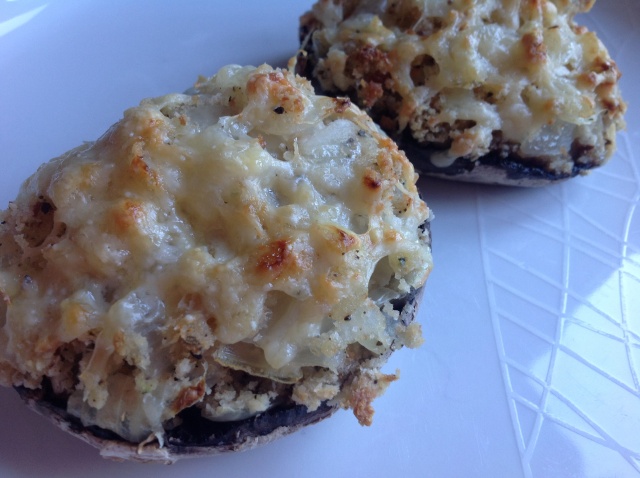 This was delicious! The mushrooms were just nicely cooked, the stuffing was a lovely consistency and a really fab flavour and then the cheese on top was perfect!

Would I make this again? Yes, will try with pork next time! 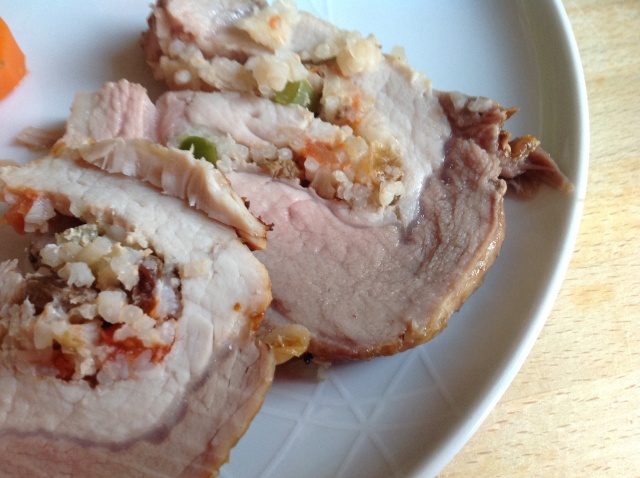 The joint I had bought is quite small so I decided to half this and hoped that would be enough.

There’s not really much cooking with this, it’s just a few minutes of frying and that’s it.

I attempted to cut open the joint I had bought and stuffed as best as I could!

I gave the joint 75 minutes in the oven and had images of the stuffing all falling out, but it actually stayed put pretty well 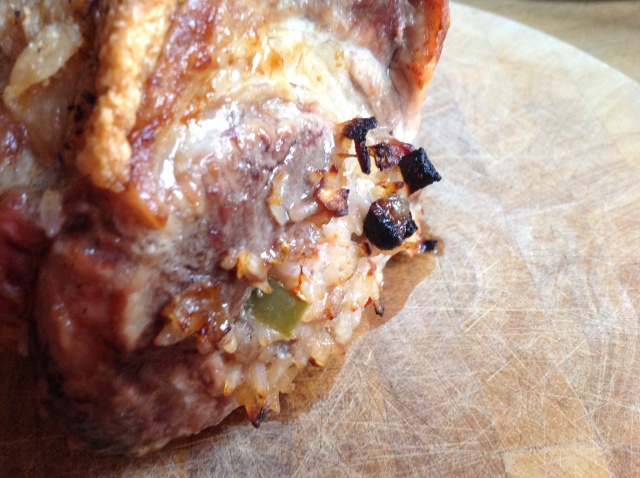 It sliced really well and then we just had this with some veg and it was great. It was good and I could taste all the different components, I just wished there was more! I think I was a bit over cautious when it came to stuffing the meat!

Would I make this again? Possibly, it was good but definitely needed more

There is a bit of planning to my blog, I do have to be pretty organised so I know I have a recipe to make each day. I thought I had done something from every chapter until I realised there was a whole chapter on stuffings!! So picked this one first

Lightly fry the mushrooms and onion in the fat for 2-3 minutes until soft but not coloured. Add the parsley, seasoning and breadcrumbs and bind with a little beaten egg. Use to stuff vegetables such as tomatoes or green peppers.

I made the full quantity of this and it was the prefect amount to stuff two full peppers. I know the recipe suggests green peppers but I picked red. To make the stuffing itself took minutes!

The recipe doesn’t advise how long to actually cook the stuffing for. I suppose it would depend on what your are stuffing! I think the main thing is that the egg gets cooked which shouldn’t take long. Since I was using peppers I referred back to the stuffed peppers recipe I made a while back, I know that was stuffed with a rice mix but assumed the oven cooking time would be the same. So I cooked these for about 20 minutes. I also used the tip from that recipe by surrounding the peppers with some stock while they cook in the oven. That helped make the peppers themselves nice and soft.

After 20 minutes the top of the stuffing mix had started to crisp up a bit and the peppers felt soft. The two were a great combination! I know it’s not the prettiest to look at but I really enjoyed this. The filling has a nice flavour, but I have to say some bacon in there wouldn’t go a miss! I was also tempted to put some more breadcrumbs over the top before it went in the oven but kept to the recipe.

As a midweek dinner this is good for me, surprisingly filling and tasty. As for the stuffing I do think it could be combined with some meats as well as vegetables, would be good with pork and chicken as well.

Would I make this again? Yes, but maybe adding bacon, more breadcrumbs or even a wee grating of cheese!