I’m trying to do more cold puddings and I liked the sound of this one, although I am always slighty wary about raw eggs!!

As much as my husband and daughter are up for trying things I was only making this for me!! I don’t think this appealed to them and I didn’t want to end up eating the lot myself, so I was only using one egg and one ounce of sugar..

Which after a good beating does quickly turn pale and creamy..

Then I added what I thought was a third of the rind of a lemon..

Then I slowly stirred in my estimated thirded juice of a lemon..

So next I put it over a pan of water and stirred until it thickened. This stage did take quite a while, I think I had this on the hob for about 15 minutes before it felt thick. I was wary of it curdling but wasn’t sure if it should be like a lemon curd consistency or more like a thick cream..

Once it had cooled a bit it did thicken even more and became very sticky..

Next I whisked the egg white..

That was then carefully folded into the lemon mix and then poured into one of my very underused cocktail glasses..

After a few hours in the fridge I finally got to try this and it’s delicious! I gave my daughter a spoonful and we ended up fighting over it! It is quite sweet so could maybe use less sugar but the lemonyness is perfect!! It’s super light and almost frothy like. I couldn’t help but think about the raw egg white initially but after a few spoonfuls I forgot about that and quite happily ate the lot, minus a few spoonfuls to my daughter..

Would I make this again? Yes, loved it..

This isn’t much of a recipe! It’s more of a suggestion..

I had bought pork loin chops, I’m wasnt sure if there is a difference between a loin chop and a regular chop, so I did a bit of a search and there’s actually a few chop options! I prefer these as don’t have the bone in them..

The recipe talks about the grill pan and the grid, not sure what the grid is! I just put the pork under the grill, then sliced up the apple – I don’t have a corer so improvised with a knife and nearly sliced my hand open..

…then when the pork was just about done I put the apple rings on under the grill around the pork and allowed to grill with the chops for the last few minutes. I maybe over browned slightly..

So that’s all there is to it! I served each chop with a couple of slices of apple on top..

We were just having this with some good old frozen veg!!

Well the pork chop is good and the apple with it is also good! A classic combination! My daughter didn’t like the apple but I suppose aged 7 it might seem weird to have fruit and meat together!! I think it was great, and a great dinner.

I made the souffle omelette a while ago and that also involved separating the eggs but was started on the hob and then finished under the grill, this one is all cooked in the oven..

I was making this for my breakfast so I thought one egg was a bit stingy so opted to half and make with two. First off the yolks are whisked..

Then the almonds and water are added which seems very unusual..

Then I whisked the egg whites..

I greased one of my bowls and then swithered over using jam or not, it just all seems very weird! I have some homemade rhubarb and ginger jam so I decided to try it and hoped I wouldn’t regret it!!

I folded the yolks and whites together and then gently poured into the bowl..

After 20 minutes in the oven it’s a nice golden colour and has puffed up a bit, maybe not as much as I’d expected..

I sprinkled a little sugar over the top and this was breakfast..

I was a little unsure about this, but I ate the whole thing and actually quite enjoyed it!! The texture is nice, really soft and light..

The jammy layer is oddly quite nice, but it’s the almonds that’s the weirdest bit!

Would I make this again? Yes I would!

Sometimes you can’t beat pie and beans for tea…

I was making three mini pies for us, so I reduced all the ingredients to fit with that. I made 4 oz of shortcrust pastry using the same recipe from the book..

That was rolled out and used to line each of the pie dishes..

Then each one is filled with a rasher of chopped bacon..

It’s basically one egg person but I whisked the eggs and milk together and then split between the three pie dishes..

Then I put a lid on each pie, and do think I could be a bit neater with my pastry rolling!!

They were brushed with the last bits of egg and then into the oven. I followed the temperature lowering instructions but didn’t actually look in on them until almost the full time was done and they had puffed out to almost double the size of the tin! I gave them the full cooking time and after then they were really puffed and golden..

I was worried about getting them out of the tin but two came out really easily and the third just needed a bit of assistance!

So this was tea, a bacon and egg pie with beans..

Well for someone who doesn’t like egg I loved this!! The pastry is great and well cooked right through. The filling is so light and is obviously the cause of the swelling! It’s like a soufflé omelette inside a pie!

We all loved this!

Would I make this again? Yes definitely..

We do like having some sort of slow cooked dish on a Sunday, and I like the sound of this slow cooked curry..

The coconut milk tip is not something I had ever heard of!! So now I know I can dissolve desiccated coconut in water in the event I can’t find coconut milk!

I did a quick search for this recipe and did come across a few that had pretty much similar ingredients, although fresh chillies and fresh ginger did feature.

The smell and colours of the spices together is good..

Then I mixed all that with some of the coconut milk..

Once the onion and garlic had been cooking for a few minutes I added the paste..

Then after another few minutes the meat was added.. 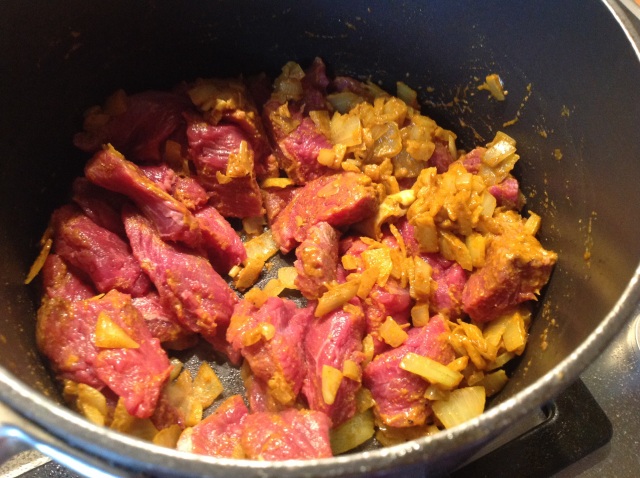 So the recipe says the stock should be added at the same time as the meat and there is no real browning stage, so that’s what I did! 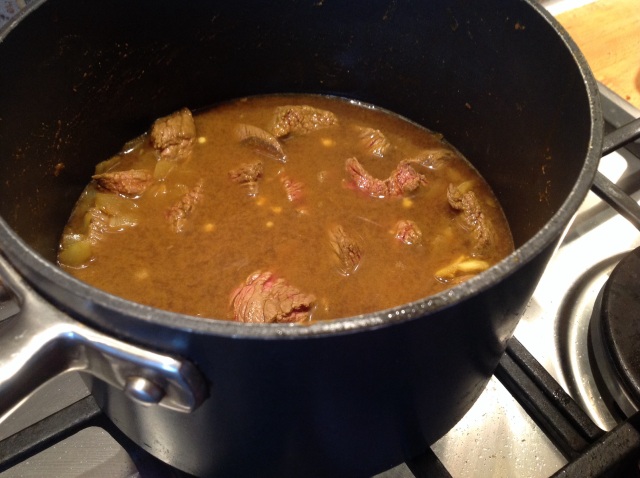 An hour does not seem long enough at all to cook the meat, I think I ended up leaving this to simmer for nearer 2 hours! I had expected the liquid to all simmer away, but there’s still a decent amount after all that time..

So then the coconut milk, lemon juice and salt is added and it kind of totally ruins the look of it, there’s now way too much liquid! So I served this just with some boiled rice and chose not to serve any of the weird fruit accompaniments that the book suggests!

Our plates were drowning in sauce and there was still loads left in the pan, so it’s just as well it tastes so good!! The sauce truly is delicious, the flavour from all the spices and the coconut milk is great. The meat is lovely and soft and the three of us loved this. I have loads of sauce left so tomorrow I am going to make a version of this with prawns!

Would I make this again? Yes, loved it..

So I know this looks like baby food but I was in the mood for something warm and comforting for pudding, and I have a bag of pudding rice in the cupboard that I haven’t used in ages..

I made the rice pudding a while back, which was baked in the oven, and that was brilliant! That recipe didn’t say to specifically use pudding rice but I did, and this recipe does not specify either but again I assumed that’s what I should be using.

I was only making this for me so I decided to half everything..

So it’s all just put on to very gently simmer..

I checked on it every 10 mins and gave a stir to break up any skin that formed on the surface! I think I had this cooking for just over an hour and by then all the milk had been absorbed and the rice was nice and soft.. 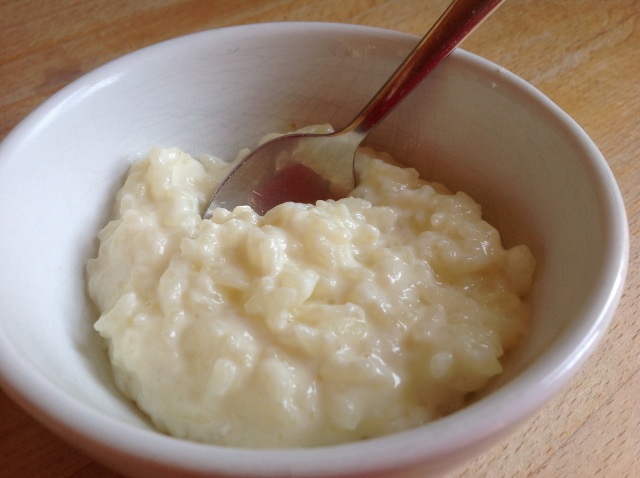 Well I loved loved loved this!! It’s soft and creamy and warm and lovely! Just the kind of pudding I was in the mood for! The recipe says this can be used as a base for peach Conde, which I will do at some point, but I think this is great just as it is!

Would I make this again? Yes, and I wish I’d made more!

This isn’t from the book, this is from another food blog Good Food Everday. I saw this recipe while sitting at my desk in work and it looked and sounded so amazing that I had to try it and pass it on.

Here’s the link for the recipe. It really does make a beautiful loaf, we all loved it. I just wish I was baking this on an island in the Mediterranean!

I didn’t do the final honey glaze bit and it’s brilliant without but when I make again I will do that bit.

Made this to go with the watercress soup. Was so delicious! I don’t think I rolled it out quite thinly enough so it didn’t hold it’s shape during the second prove. This isn’t from the book, this is from a blog called The Crazy Kitchen, here’s the link, would highly recommend trying this

Really enjoy making fresh bread and as we were having a curry I fancied making some naan. These are not from the book, here’s this link. Really tasty, puffed up more like a pitta bread but really enjoyed. 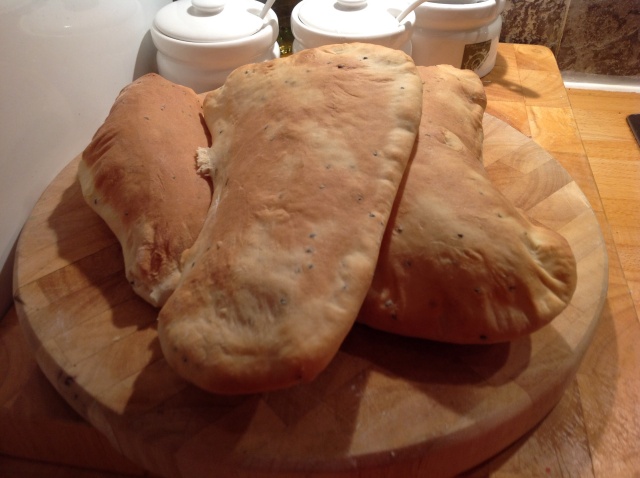 As it’s the weekend I’ve a bit more time to spend cooking. I really enjoy bread making so picked a bread product I’d never tried. It’s an enriched dough with a high egg and butter content. This recipe was for 24 brioches. I was going to half it but the full recipe asked for a quarter of an ounce of yeast and I could not measure half that! This recipe included 4 whole eggs and then another 4 egg yolks. To save waste I froze the extra 4 egg whites, pretty sure there are a few meringue based recipes in the book and I will need the egg whites for that..

The dough was pretty straightforward and was left to rise for a while. The recipe said it needed to rise till doubled, I left it for a good few hours and had more than doubled. It says to butter 24 muffin tins then make 24 balls and place in each tin and then top them with 24 smaller balls of the dough. They were baked at a really high temp for only ten minutes. They came out of the oven smelling brilliant, a rich buttery smell.

I had a helper with this, Kirsten helped shape and taste! They turned out well, dark golden and glistening. I think if I was to make again I’d pay more attention to shape.

Would I make again? Yes, would also try putting some chocolate inside before baking